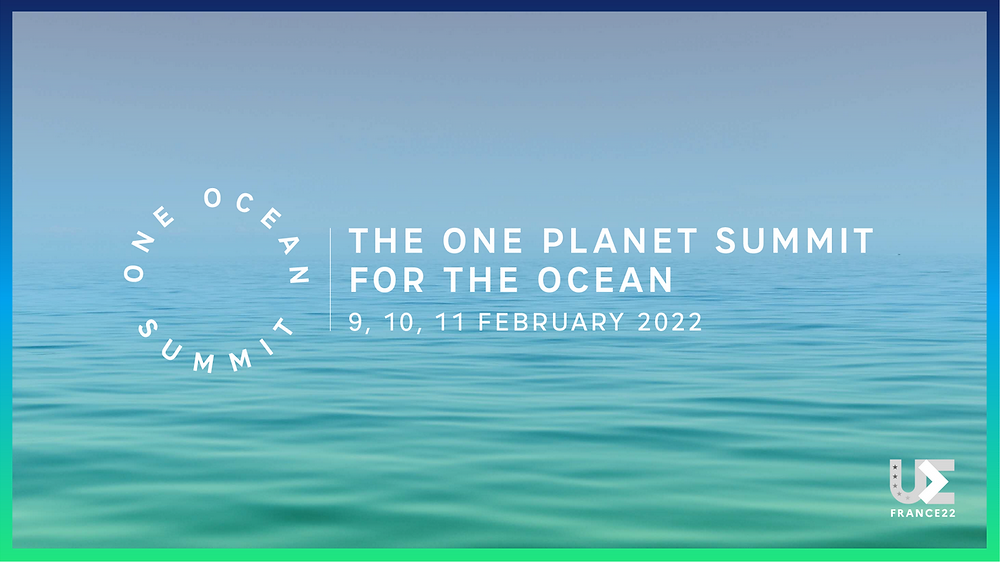 For a brief moment, Brest, France was the center of the oceanographic world, where experts, government officials, and maritime professionals gathered at the One Ocean Summit to attempt to heighten global ambitions on solving maritime issues and come up with plans for efficient ocean governance.

This three-day summit, taking place from 9 to 11 February 2022, addressed a multitude of marine challenges such as biodiversity, pollution, and overfishing. From the words of US climate envoy John Kerry, the “the ocean that makes life on Earth possible, produces more than half of the oxygen we breathe – and even that is at risk. The ocean and climate are inextricably linked. They’re one and the same.”

This summit was attended by government leaders, institutional officials, and business leaders, but what exactly are their plans for the future, and what is at stake?

Our oceans cover more than 70% of the surface of our planet but are often a sidelined topic during conversations on climate change and biodiversity at major international events. Oceans regulate the climate on Earth which, in turn, determines rainfall, droughts, floods, and stabilizes global temperatures. They are also the world’s largest carbon reservoir: approximately 83% of the global carbon cycle is circulated through marine waters. They are a life-support system for all organisms on Earth; however, global oceans are threatened by climate change, pollution, and overexploitation of marine resources and we have already begun to experience the consequences.

Anthropogenic activity, mainly since the start of the industrial revolution, has caused a major increase in the greenhouse gasses in the atmosphere. As a result, our atmosphere is trapping more energy from the sun than before. This heat gets absorbed throughout the Earth, including our oceans resulting in higher sea surface temperatures and rising sea levels. A NOAA study has found that global sea levels have gone up 3.4 inches from 1993 to 2019. Sea level rise greatly varies in certain parts of the world though. The Southeast Florida Regional Climate Change Compact estimates that in South Florida, sea levels will rise another 10-17 inches by 2040. In addition, in some areas of the state tidal flooding has increased 352% since 2000. This reality is shared by many coastal communities throughout the world and threatens to displace millions of people.

Millions of tons of plastic end up in the ocean every year, making up 80% of all marine debris found. These plastics, which mostly enter the oceans from coasts and rivers, are ingested by or entangle marine organisms causing severe injuries and oftentimes death. Ocean pollution also includes eutrophication, which is the process of accumulation of nutrients, such as nitrogen, as a result of air pollution. This nutrient overload causes algae blooms which kill marine life, severely impacting oceanic ecosystems and biodiversity.

Overfishing creates an imbalance that disturbs the global food web. It not only affects marine life that is becoming dangerously over depleted but also the populations of species that rely on marine life for food. Vulnerable species include sea turtles and corals. Currently, less than two percent of global oceans are set aside as marine reserves. Evidently, there are not enough protective measures in place to prevent ocean exploitation.

These issues were discussed in depth during the One Ocean Summit. As a result, there were four important initiatives that were highlighted:

30 new countries have joined the High Ambition Coalition for Nature and People. There are now 84 countries that are committed to the goal of protecting 30% of land and marine areas under national jurisdiction by 2030.

14 countries attending the summit have committed to fighting against illegal fishing. Six of the fourteen ratified the Cape Town Agreement of the IMO on safety standards for fishing vessels. In addition, two countries will ratify the FAO Port State Measures Agreement, which will allow for better regulation of fishing activities.

The French Development Agency and the European Investment Bank launched the Clean Oceans Initiative, which will help reduce plastic pollution in the ocean. These organizations have also provided 4 billion euros in funding by 2025 to fund projects that will reduce plastic waste. In addition, Rodolphe Saadé, chief executive of the shipping company CMA CGM, has announced that they will not transport any plastic waste aboard its ships anymore.

Ocean-based solutions to mitigate climate change were a highlight during this summit and were discussed deeply by many Heads of State. Large Ocean States such as Fiji, Tonga, and Palau expressed their concerns about the consequences of sea-level rise and emphasized the importance of coastal ecosystems conservation. In addition, the structuring of a blue carbon market was mentioned during the summit. This market would give an economic valuation of marine and coastal ecosystem services.

UNESCO has announced that at least 80% of the seabed will be mapped by 2030, compared to 20% currently, with the support of its Member States and the private sector. This is important because, in the words of UNESCO’s Director-General, “How can we succeed in protecting the ocean when we know so little about it?” Having a better understanding of our oceans will help us identify areas that need to be safeguarded and improve ocean governance.

The One Ocean Summit is just the beginning of the global response that is required for ocean protection. This summit placed oceans on international political agendas by highlighting its role in climate and social balances. Government leaders understand that we are obligated to preserve our oceans not only to maintain ecosystem balance but also for human prosperity and health.